Simple and yummy! How to make the best Mahalabia (Arabic milk pudding) 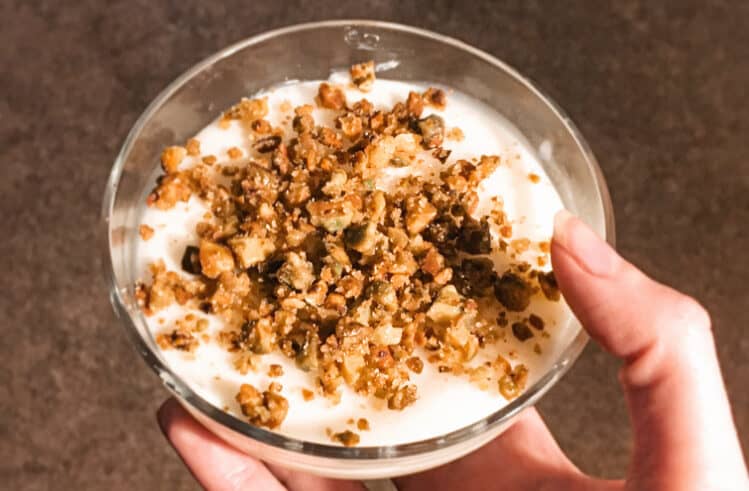 This dessert as with most Arabic words, when spelt in English, seems to have many spellings! Is it Mahalabia? Mahalabiya? Mehalabia? Muhallabi? Either way, whatever the spelling! This is a tasty recipe that’s perfect for adults and children alike. You can also customise it with lots of different toppings!

This dessert is commonly served during Ramadan and often in the Middle East given to children when they don’t feel very well. In fact, my husband used to eat this during Ramadan as a child in Saudi Arabia.

It is served cold and you leave it to set in the fridge. So it’s the ultimate easy Arabic dessert to keep for any time you want something sweet. Or for dinner parties as you can prepare them all the day before. I’ve kept mine for a week in the fridge after cooking and has been still fine to eat!

What more Arabic Dessert Recipes? (More coming soon! Subscribe to our e-mail list for updates)
Easy Luqaimat recipe plus make your own Luqaimat machine!
How to make authentic Karak chai at home

Want to learn more about Middle Eastern and Arabic food?
What is the traditional food of the UAE?

What kitchenware and utensils do I need?

These are some of my favourite ones below:

These pans from Le Creuset are made from cast iron so will last a life time (they actually offer a lifetime guarantee)! Plus they can be transferred directly to the oven. Also there’s no nasty chemicals to make them none stick with the cast iron versions.

If you’re looking to grab a great deal, one of my favourite stores for high quality items at low prices is TJ Maxx (called TK Maxx in the UK)

What is best to serve Mahalabia in?

So to serve the dessert, I recommend using glassware as it’ll show off the dessert nicely. Alternatively, if you don’t have any suitable glassware you can use ramekins.

If you live in the UAE, I love these ones from West Elm at only 15 AED each. Select the “Modern Red Style”

Use code DAYX at West Elm to get 10% off your order!

If you’re in the UK, I recommend Preloved.co.uk where you can buy lots of items second hand (helping to recycle items yay planet!), they have many beautiful vintage style glasses For the lastest available dessert glass bowls click here

So let’s get to the Mahalabia recipe! I’ve included some answers to common questions below the recipe!

The caramalised nuts of this recipe is really what makes it super yummy compared to all the other recipes I’ve tried.

*The traditional Middle Eastern version uses rice flour instead of cornflour and you can easily change it for rice flour if you wish. Personally, I prefer cornflour for a slightly sweeter taste!

Once it’s time to enjoy the dessert
1. Take the Mahalabia out of the fridge and check it’s set by lightly pressing it with the back of a teaspoon
2. Sprinkle the pistachio topping evenly over the desserts

You can enjoy them straight away or allow them to reach room temperature before eating, whichever you prefer!

Can I put alternative toppings on the milk pudding?

Yes there are so many possibilities with this Mehalabia recipe! If you’re having a party, why not try a few of them and see which one your guests love the most!

Some of my favourites:
– Change the rose water for orange zest and put grated dark chocolate as the topping
– Use caramel sauce instead of rose water and change pistachios for chopped pecans
– Add ground up cardamon to the milk pudding and create (or buy) a pistachio cream that goes on top as a second layer along with a small sprinkle of caramelised pistachios
– Create a Karak tea version with black tea, star anise, cloves, cinnamon and cardamon added to the milk pudding (minus the rose water) plus a honey drizzle topping and a pinch of saffron on top
– Create a nice and simple version with grated coconut and use more grated coconut for the topping

This sweet milk pudding is naturally gluten-free as it’s made with cornflour rather than flour. So it’s one of the few Arabic dessert recipes that does not contain gluten!

In order to ensure it is truly 100% gluten-free, make sure you buy gluten-free cornflour! As sometimes they can mill flour or other gluten products in the same factories. Making them cross-contaminated with products containing gluten.

Where does Mahalabia / Mahalabiya come from?

So like many Arabic desserts and Middle Eastern foods, there is a long and rich history of the origins of the recipe! The name itself dates back to the early 7th century from a Persian chef who used to feed it to a military general named Al Muhallab, hence the name Muhallabi.

The earliest written recipes we find are in Iraq dating to the 10th Century where we see three versions, using rice flour. One even added chicken! To make a savoury milk pudding. The other recipe was more like an egg custard. The savoury version while losing popularity in the rest of the world is still seen today in Turkey.

The sweet version with rose as a key flavour is first seen in the Ottoman Empire and even made its way to England in a 19th Century cookbook. Using rice flour, milk, sugar and flavoured with rose or jasmine.

I hope you’ve enjoyed learning more about Mahalabia / Muhallabi and don’t forget to tag me on Instagram at DanniInTheDesert if you give the recipe a go!

This article contains affiliate links and while these links don’t cost you any extra money, I do earn a little bit of commission when you purchase through them. Doing this helps support my blog and allows me to keep writing these articles for you!

Everything looks so delicious I have to try it out. Thank you for sharing your recipe!

This looks so tasty and surprisingly easier than I thought it would be!

Yes this is one of the best things, it’s a nice and easy recipe!

This sounds delicious – does the rose come through quite strongly? Pinned it to try next time I have a baking day – thank you!

No the rose is actually pretty soft and just adds a kind of sweetness. You can add less to be safe for the first time if you’re not a fan but personally I love the taste of it! haha

Q&A; What is the Saudi flag? Where is it on the map? And more!

What is the UAE? What is it famous...