USE CODE LAUNCH30 IN OUR SHOP FOR 30% OFF
Home Featured What is the traditional food of the UAE?
FeaturedGuides to DubaiKhaleeji Culture

What is the traditional food of the UAE?

You can’t visit Dubai without tasting some of the traditional food of the UAE! If you’ve lived in Dubai for years, you might not yet have tried Emirati food. Due to the huge expatriate population, there are often more options for international food than there is for Emirati food. Commonly Emirati food was either homemade or delivered from small kitchens that you might pass by without a glance. In the last few years, more Emirati restaurants have started to open up. So here is a guide to the traditional food of the UAE and where you can try it! The breakfast items are usually washed down with a cup of Karak chai, so don’t forget to try that too while you’re there! (One of my favourite addictions)

For a long time, there actually weren’t many Emirati restaurants for expatriates or tourists. Where you could actually sit in and eat. Al Fanar was one of the first to open in 2011. Followed by Seven Sands in 2015, located in JBR. These were one of the first Emirati sit down style restaurants to open. Al Shandagha has delivered traditional Emirati food since 1988.

What is the traditional food of the UAE like?

The breakfast items tend to be quite sweet while the dinner dishes tend to be mostly meat and rice or grains. Fish is also popular due to the closeness of the sea. Without modern farming techniques and the harsh weather of the desert, most dishes were based on meat, dairy and seafood. As many vegetables or fruits required too much water to survive.

Emirati food had to keep people going for a long time due to their bedouin lifestyle. So lots of protein and fat was essential. Despite the stereotypes of Arabs eating camels, Camel was rarely eaten due to how expensive the meat was and still to this day it is saved for special occasions. The most common meat was goat and is still popular today.

What influences are there are on Emirati food?

Emirati food was heavily influenced by trade with India and Iran, so there is a mixture of elements from Iranian and Indian food in the traditional food of the UAE. These were combined with the unique herbs and spices local to the Emirates. Helping create many of the dishes enjoyed to this day.

While there is an influence from India and they use a lot of spice mixes in the food, this is often without chilli or only a small amount. It is very common for a small bottle of chilli to be served with the meal and can be added based on your own personal taste. This makes it far less spicy than Indian food but still full of flavour.

How do you usually eat traditional food of the UAE?

The traditional way is to eat sitting on the floor with cushions and a covering on the floor instead of a table. A range of dishes will be spread out across the floor and everyone shares the dishes. in Khaleeji culture, people eat with their hands rather than using a knife and fork.

Also, it’s quite common for the heavier rice dishes to be served in the day as a lunch (unless it Ramadan of course) rather than late evenings like they typically do in Western countries.

What are the key dishes of Emirati food?

We’ll go through some of the key dishes that make up the traditional food of the UAE along with the restaurants we recommend in Dubai to try each of these dishes.

This is a traditional Emirati food typically served for breakfast. The word raga means thin in Arabic and this is because it’s a very thin bread. Similar to a crepe. The traditional recipe is with cheese and fish sauce spread onto the bread and folded up. Other popular fillings include egg or Chips Oman (another snack popular in the Arabian gulf). You can have all four in one wrap if you like! If you like it sweet, have it with Nutella instead.

It’s best eaten fresh off the griddle pan! So make sure to drive and eat it hot! Al Labeeb doesn’t have any chairs as typically people will take it back to their car and sit there to eat it. It’s also a great cheap meal, costing between 4 and 6 aed depending on what filling you have. In Oman, it’s just called Khubz Omani or Omani bread and it’s popular to have cheese and honey. Cheese and egg with a dash of chilli sauce is another popular choice. The fish sauce is more unique to the UAE.

Al Labeeb Grocery – Jumeirah. This small open kitchen in the front part of a grocery store is the most famous in Dubai for it’s Regag. You might not expect it looking from the outside but we definitely recommend to visit this one. 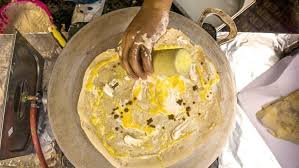 These are little fried balls, similar to mini doughnuts but with a hint of cardamon. They then pour date syrup all over them and give you toothpicks in order to pick up the individual Luqaimats. Honey is also popular if you’re not a fan of date syrup but date syrup is more traditional. Normally served as a dessert but can also be a breakfast food.

This dessert is very popular during Ramadan (you can find out more about what Ramadan is like in Dubai here.) Perfect as a quick energy burst after you’ve been fasting all day. You can get a savory kind with cheese inside but personally I love the traditional style with date syrup. They’re quite addictive and you can easily end up eating a whole bowl!

The Tent – Jumeirah in Umm Suqeim. This restaurant is a nice casual restaurant at an amazing location, looking directly out onto Umm Suqiem Beach. If you’re visiting Dubai, this place is a must since due to how unique it is and the amazing view. It’s also a great breakfast spot. Luqaimat is only served until 12, so start your day early and then go enjoy the beach! 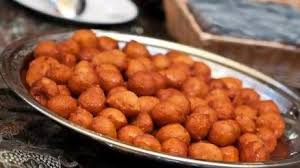 This is slightly more unusual breakfast food. The bottom is sweet vermicelli noodles and has an omelette resting on top. This mixture of savoury and sweet is quite different when you try it for the first time. Yet it’s definitely a dish that slowly grows on you. Then it becomes quite a weird Emirati food craving that you’ll have to explain to your friends! 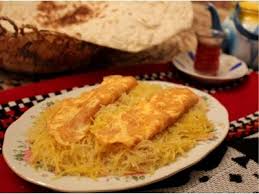 A popular and classic dinner dish in the Arabian gulf. Each gulf country has different spice mixes for this dish so you’ll find it sometimes labelled as “Emirati Machboos” or “Kuwaiti Machboos.” Traditionally it is made with chicken and served on a bed of rice. Machboos can also be made with other meats or fish. It is traditionally served on a large plate for everyone to share. This is a must for any person wanting to try the traditional food of the UAE.

Al Fanar Restaurant – Festival City & Jumeirah Now a Dubai classic, each restaurant is like travelling back in time. Festival city is its most unique venue, featuring a large tree in the middle of the dining area. This restaurant is a must for those wanting to try Emirati food. You’ll also find plenty of other dishes off this list there! 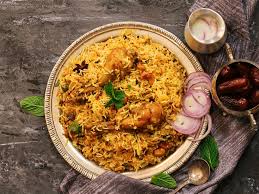 If you like to eat on the more adventurous side, this Emirati food is for you! This lunch or dinner dish is made from crumbled or minced shark layered on top of rice. Sometimes they style it with alternating layers of shark and rice creating a pretty tower. Again like the other dishes, you’ll find a very interesting and flavoursome meal due to the spice mixes. Emirati food is traditionally shared so commonly you’ll find the portions sizes are big enough for two. So make sure you take your other adventurous friend with you!

Al Jawareh Restaurant, Jumeirah 1. A cute and rustic feeling restaurant without feeling touristy. You can choose to eat sitting at a table or in a booth on the floor in true bedouin style. 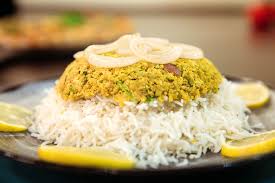 This is one of my personal favourites and is an ideal lunch or dinner for the winter. Though not everyone loves this dish due to its porridge-like consistency. It is a very traditional food of UAE. The dish is made from slowly cooking meat, usually mutton, with barley for a long period until it becomes almost like a soup. They then serve it with a big spoon of ghee added on top. It isn’t the most beautiful looking of meals but it is delicious!

Seven Sands – Jumeriah Beach Residences (JBR) Located in the popular JBR area, this restaurant is more on the finer dining side of Emirati restaurants with luxurious interiors to match. You’ll also find quite a few mixed and contemporary takes on traditional dishes. They also do a prawn Jasheed if you’re not wanting to try the shark version.

The best Harees and my personal favourite place to order Harees from is Al Shandagha. They’re available in various locations and deliver throughout Dubai. 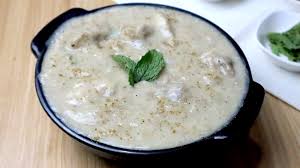 I hope you’ve learnt some more about Emirati food and are excited to try some of the traditional foods of the UAE. Whether you’re living in Dubai or just visiting, I hope you have an amazing time and enjoy the food! If you have already tried some of the dishes off this list, then let us know what you thought of them in the comments. Which were your favourites?

Since it’s currently summertime here in Dubai and the UAE, why not check out “Six things to do in Dubai summer?” For some ideas on fun activities during the hottest months of the year.

6 amazing destinations you can easily fly from Dubai

6 amazing destinations you can easily fly from...

Why I decided to fast this Ramadan

8 things you only say in Dubai