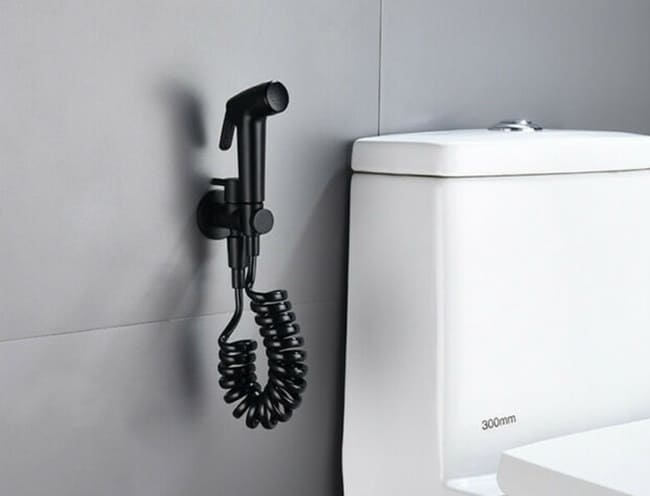 For many people when they first visit or move to the Middle East region, they may be wondering. What on earth is that water gun next to the toilet? It’s the Middle East bidet! Also known as the bum gun! Curious to learn more and where it originally came from? Plus some practical advice on how to use it! Let’s go!

Certainly with Coronavirus and toilet paper disappearing off the shelves, even more people in Europe and the United States have become curious about bidets and other ways to clean yourself after the toilet! This is the Middle Eastern version of a bidet and is way more convenient than the style commonly seen in Europe which is basically an oval shaped sink that you sit on.

If you’re curious about the Middle East, make sure to check out some of my other articles:

Where is Dubai? How was the UAE formed? All your questions answered!
Who rules Saudi Arabia? What is the text on the Saudi flag? Everything you’ve wondered about Saudi answered!
Why do Muslim women wear hijab?
Beginners guide to visiting a Mosque for the first time

What is the water gun next to the toilet? What is the Arabic name of the bum gun?

The name in Arabic is called a “Shatafa” or “Shattaf” and this is the Middle East version of a bidet. It’s also called a bidet shower or spray bidet in English. The European version, which is like a sink, is called a Bidet.

The purpose of it is simple. To clean your intimate areas after going the bathroom.

What is a bidet?

A bidet has multiple forms but there are three main ones. The word itself originally comes from France. It is traced back to the 1700s where a porcelain bowl with legs was filled with water and used. The word “bidet” means pony and is thought to represent the way in which you straddle over it.

The modern version of this basin kind is similar to a sink and has a tap at the top. You turn the tap on, sit over it after going to the bathroom and wash yourself.

The second kind is the style popular in Japan which is in built into the toilet and fully electric. Operated by a button, it comes out from inside the toilet bowl and sprays upwards.

The third kind which is more common in the Middle East and Asia is called a spray bidet or shower bidet. It is a hose connected to the mains water that you use while sat on the toilet. It has a small lever you push with your thumb in order to spray the water. This is called a shatafa.

What is a Shattaf or Shatafa? Where did it originate?

Shattaf is taken from the Arabic word to rinse. The Shattaf or Shatafa is specifically the hose style bidet that is used to clean yourself. In Islam, cleanliness is highly regarded. Including washing yourself after the bathroom and when you’ve been intimate with your partner.

This is why these items are hugely popular with Muslims and why you’ll find them in the majority of Muslim countries! Though how it exactly originated or from where is not known.

One of the oldest versions we find is called the “Lota” which is a pot with a thin spout that allows for you to clean yourself after going the toilet. We can trace the “Lota” back to the 2nd century BC in India.

How do you use a Shattaf?

It can definitely take some getting used to! Especially the first few times you use it. So here are some tips for using the Shattaf for the first time!

Everyone has their own different ways they prefer to use the Shatafa and you can experiment for your own preference. Some prefer to use tissues first and then wash.

Also in some Muslim countries it’s not common to supply toilet paper as people use their left hand to clean this area instead (hence why you shake with your right hand and not your left in the region!)

Traditionally people would carry a re-useable towel specially for drying off after using the shattaf. This is especially true in more remote locations in the UAE and other Middle Eastern countries.

Are bum guns sanitary? Why should you use the Middle East bidet?

We asked a Doctor who specialises in bowel surgery his medical opinion. “Wiping these delicate areas with dry paper and over wiping can cause fissures or damage to the area. In addition, when using paper alone, fecal matter can end up being wiped around to the urinary tract. This increases your risk of a urinary infection. The Shattaf improves hygiene and the water helps to avoid this friction.”

We look at the positives and negatives of each in order to decide:

Overall, the bum gun is a lot easier to use than the sink style Bidet and therefore you are much more likely to keep using it. I know many households in England who installed a Bidet due to their popularity in the 1980s but now barely use them.

This is likely due to the lack of ease when using them when compared with the spray bidet / shatafa.

If you’re looking to install one in your home, I really like this matte style one from Light In The Box which comes in 3 different colours and offers worldwide shipping

Once you get used to using the Shatafa or Shattaf it’s very hard to go back to not having one. In fact you can even buy this travel one from Danube Home if you live in the UAE, to make sure you never go without it again!

I’m sure if you’ve been to the Middle East or spent any amount of time living there, the ‘bum gun’ will quickly become one of your favourite items!

21 amazing restaurants with the best view in Dubai in 2023