19 of the best hotels near Burj Khalifa and Dubai Mall

They only Dubai dress code guide for tourists you’ll ever need!

Visiting the Burj Khalifa; ticket cost & At The Top alternatives

Everything you want to know about The Real Housewives of Dubai show...

Looking for a Friday sermon in English? It can be difficult finding a Juma Khutba in English in Dubai and most of the lists seem to be from ages ago. So I decided to explore Dubai along with speaking to my Islamic centre to find out the places where you can attend a Juma Khutba if your Arabic isn’t that great. So here is the 2019 updated edition for you of where you can attend Friday sermon in English and also what they are like to attend! Alhamdullilah!

*Due to Covid-19 many Masjids are closed for Jummah Prayers, so here are a list of Juma Khutbahs available online in English, Arabic and Urdu

Also I’d like to add since many ask me, you’re are able to attend a mosque / masjid even if you’re not a Muslim. You can simply take a seat at the back and listen to the sermon and watch the prayers. However, if you are female, you are not allowed to sit in the mosque during your period. If you’re curious and would like a formal tour; the mosque in Dubai Marina, as mentioned below, offers a tour for all backgrounds. Sadly this one is no longer doing a khutbah in English, only Arabic
Commonly referred to as the Palm Jumeirah mosque due to it’s location and is well known for it’s iconic modern architecture. This lovely mosque offers their Friday sermon in English and really has a whole mix of nationalities in attendance. The ladies section is quite large also, so it’s really a shame they aren’t doing the khutbah in English anymore. 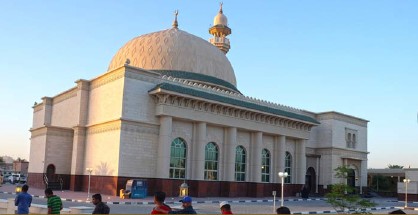 The Friday sermon is delivered entirely in English and is very popular. The ladies prayer hall was so busy some had to stand in the hallway. So definitely you need to get there early since the parking gets full. The ladies room isn’t that large so that is another reason why it gets full quickly.

This small mosque is easy to miss on the Jumeirah Beach Road and all the signs are in Arabic so you may think you’re in the wrong mosque for an English Friday sermon. This one despite being smaller wasn’t as busy as the Aisha mosque and the entire sermon is done in English, not just a summary. The ladies section is that large but fewer people seem to attend. It is also easier for parking, making it one of my favourites. Also the Imam’s English is very good. 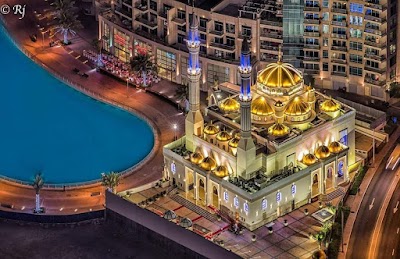 It’s hard to miss this mosque at night with it’s shiny gold domes and blue uplights. It’s definitely an iconic part of Dubai Marina. This pretty mosque delivers it’s sermon in Arabic and then does a five minute summary in English at the end (not a full sermon). Also be warned, this mosque is very popular and all the surrounding roads will be covered in parked cars. So get there early or park nearby and walk. The ladies section is a good size but a little bit of a maze when you go there for the first time.

In addition, this mosque is also open to the public and allows tours for those who are curious.

This mosque first completes the sermon in Arabic, including finishing the prayer and then they do a separate khutbah in English. The Imam’s is fluent in English and they deliver a full in-depth sermon. Also the women’s section is pretty large so you’ll easily find space to sit. Like many of the others, the parketing gets very busy so you definitely need to get there early the find parking. Also while the English sermon is done brilliantly, sadly due to it being after the Arabic sermon, it can be pretty noisy while everyone leaves and I found it hard to hear well the beginning of the sermon.

Another one which I haven’t yet had a chance to go but other sources have said they also do a Friday sermon in English. I briefly caught the end and it seems to be suitable more for families. Again once I’ve been there for myself for the whole sermon, I’ll let you know for definite that it is in English and what it is like to attend. This one is also an Islamic centre which does classes and events throughout the week.

This one is a little bit too far for me, so it’s unlikely I’ll get chance to check this one out but resources say it delivers an English sermon after the Friday prayer. So the Arabic khutba is first, then prayer and then a second English sermon. If you get chance to verify this for me, please so let me know or leave a comment below.

So that are all the mosques/masjids that I’ve come across that do a sermon in English or have an explanation in English afterwards. If you know of any more then let me know in the comments below. Need help with prayer at work? Here are my best pieces of advice from my article earlier this week!